Sail to the COP Blog #4: The 1st Atlantic Ocean Climathon

The first ever Atlantic Ocean Climathon is now finished! This post is coming to you from Cape Verde, the first point where we have proper internet connection since last Monday (21st of October). We had a brilliant three days working with climate solutions for sustainable travel.

Seven teams worked hard in between their other daily duti 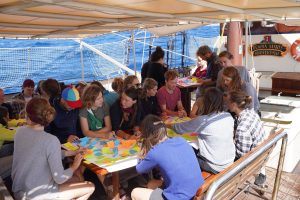 es of sailing, cooking and scrubbing the deck (13h of efficient work time in total). The last pitches represented an impressive mix of topics; from surprise local holidays to modular night trains, and educational campaigns to low-carbon travel incentives for citizens.

What is this ‘Climathon’?
Day One opens with mixed feelings of enthusiasm and scepticism. What is this Climathon? Never mind that, what’s  a 24h hackathon event? Hopefully, I clarified these worries enough during the intro session. And how then can we extract concrete solutions in such short time from the extensive pool of research that we’ve amassed so far during the think tank? This is a question to be answered by each team and participant in the following days with the help of our experts.

Transformational Thinking
We open with an inspirational video message from Kirsten Dunlop, the EIT Climate-KIC CEO. Then it’s time for the Sail to the COP partner challenges to take centre stage. Some of the teams will form around the research questions of ProRail, the Dutch Ministry for Infrastructure & Water Management, BetterPlaces, and Wageningen University & Research. The rest of the teams will form around the opportunities that the different working groups have come up with in the previous leg of the think tank. 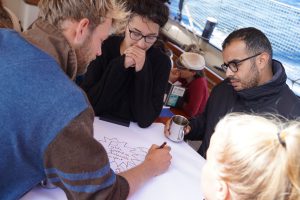 The newly formed seven teams are introduced to Transformational Thinking, a new concept for the Climathon. Transformational change describes ways to think BIG and how to transition to low-carbon societies by addressing norms and behaviours over small incremental changes.

During the second half of Day One, the teams engage in some heavy ideation with the help of Jeppe and Eva – our two professional design thinkers. The day closes with two awesome team building workshops: interpretative dance by lead Symke, and Group Thinking by facilitated Mark. In the evening the saloon buzzes with conversations about our recent pilot whale encounter and the possibilities of Day Two…

Dolphins and Design Thinking
Day Two opens with narrowing down on the specific solutions. The morning soon turns into fun and games, as some bottle nose dolphins pay us a visit! The happy distractions continue as Tori’s birthday is celebrated with some apple strudel and songs. 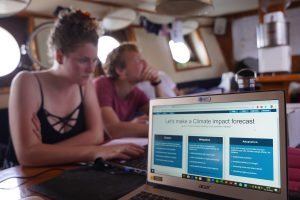 After a tasty soup lunch the teams are split in two, to attend the Climate impact forecast workshop I have hosted, and a design thinking workshop by Eva. The teams then dive into customer segments, value propositions and business models for the rest of the day.

Day Two I closed with some motivational remarks, to remind the participants that a hackathon is hardly the normal human way of decision-making, and thus frustrations are a given in such a process. However, this method also uniquely squeezes on the creativity muscles, creates resilience and gets prototype results fast! 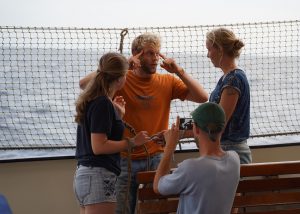 In the start of Day Three the eyes of the participants are filled with healthy mix of panic and inspiration. Everyone has something exciting to work on, but the clock seems to tick faster than usual… The teams jump into work mode, and the morning is spent in huddles in every known corner of the ship. The sun is scorching above us, and staying hydrated fast becomes a priority.

Captain Martin luckily soon sounds the horn as a sign to pull down the sails and stop for a refreshing swim in the Atlantic! Pens, books and laptops are stowed away in record time in order to jump into the cooling embrace of the ocean. A couple of nosedives and back flips later the teams are hard back at work as the deadline for pitches approaches.

Final pitches under the stars
The Teams meet  each other in a ‘Support Group’ session, where one team pitches their idea to the another and receives some much needed outside perspective. 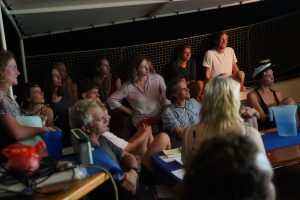 Then… After a hearty dinner prepared by the ship’s cook Marijke, its time to close the laptops and head to the mid deck for the Final Pitches! A projector is set up to beam the presentations on an old sail pulled across the front of the Crew’s quarters. 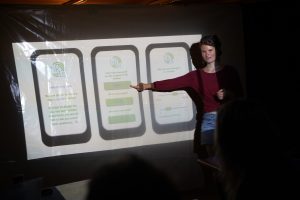 Presenters from the seven teams: “Frontline Climate Trips”, “Flight Free”, “Living Earth Campaign”, “ModuRail”, “tikls”, “EcoMiles” and “ExPlane”, all do an amazing job! The applauses and whistles break the Atlantic night’s silence every time the clock runs down on each pitch.

Despite the demanding cross-interrogation by the jury and the audience, every solutions seems to hold water. After jury’s deliberations, we have a clear idea of the strongest solutions! The winner of the Atlantic Ocean Climathon, and thus the Sail to the COP nominee for the 2020 Climathon Global Awards to be announced in a separate post.

We hope for the continuation of such out-of-the-box experiments! I hope our message in a bottle reaches you despite the lack of modern as-it-happens communications. AOC out! #aoc #atlanticoceanclimathon #climathon #sailtothecop #fleetforthefuture

The challenge Climate change is increasingly affecting social and...

Dutch version The challenge Cities and municipalities are confronted...

Sail to the COP on board the Regina Maris...

The morning sun licks the horizon as Regina Maris,...

Sail to the COP Update “Attending a Climate Conference from two sides of the Atlantic Ocean”
‘Shop Klimaatwijs’ – Practical approach for schools to work on E...

Dutch version The challenge Shop owners are often not...

Data that will boost the transformation of cities
Sail to the COP Blog #5: From crisis to positive vibes

After long deliberations about what to do now the...

A community of 3,000 people in Madagascar overcome climate...

EIT Climate-KIC supports the Sail to the COP initiative....

The Dutch start-up Field Factors – who is one...

Blog date: 27 September Preparing for the Voyage I...

Sail to the COP will deliver a road map to a sustainable future of travel
Carbon LED, LED lights for sustainable greenhouses

The challenge Cities are accountable for 70% of the...

The challenge Nature Based Solutions are innovations that are...

Nature Based Solutions, Creating climate-resilient cities with the help of nature
Black bear carbon, The green solution for old tires

The challenge Meat consumption has a devastating impact on...

The challenge The road from a great idea to...

The challenge Farmers with elevated plots of land have...