Sail to the COP blog post #2 – First days at Sea 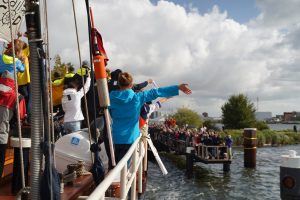 Waving goodbye!
We left the harbour in Amsterdam and said goodbye to everyone. Which was a bummer real. Many, me included, felt emotional of course. But I felt mostly positive. I think I had said my goodbyes many times over already during the preparations. I was now ready for the seas. Or so I thought… After we make it out of the last close, the weather gets super choppy. People start immediately feeling very nauseous. We’re hoisting sails and making sure we’re seaworthy, but people keep dropping. Then it hits me as well, but I make it to bed without being sick.

In sickness and in Health
My shift starts at 5am the next morning and I wake up for it feeling ok. Then. The ship does a topsy-turvy and I immediately feel terrible. I run to the bathroom in the end of the corridor and start being sick. After I start feeling slightly better however. I head up to the deck, where it’s pitch black dark and everything is turning 180 degrees with super speed. There’s rain smashing in my face and big waves coming over the side landing in my boots. I white-knuckle the railing. I last about 30 minutes before I have to give up and go clutch the toilet bowl again. The day is spent napping, going outside trying to brave it, looking at the horizon, drinking tea and trying to keep biscuits down. I start feeling slightly better.

Lady over board!
It’s around 5pm. Some of us are up on the deck trying to find a mutual understanding with the waves. Then we hear shouting from the lower deck, and see people are pointing at something in the water. I hear someone ask “is that from our ship?!”. We then all realise that the something in the water is the figure head of Regina Maris: a lady holding a dog (precious I know!). It has come loose in the choppy weather and broken off. The weather had literally torn both us and the ship apart. We keep pointing at the figure head (standard practise when there is ‘man over board’), while someone fetches Captain Martin. He coordinates an impressive rescue effort in a very short time. The operation involves the rubber boat and two of the crew; Julian and Matthew. They reach the Lady of Regina Maris, and haul it on the boat. It then takes about 18 Sail to the COPpers to pull the dingy and the figurehead back up on the Regina Maris. Everyone is super happy that we managed to get her back! Everyone also feels very relieved to know that if anyone of us goes overboard, the response will the rapid and successful.

Getting into the Groove 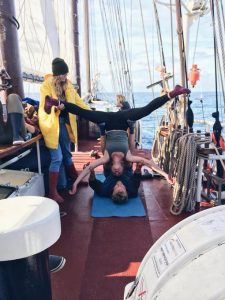 I wake up around 4:30am to prepare for my shift. I get all my warmest clothes out, and pack everything up. I head up to the wheelhouse to meet my shift mates and a sky is full of stars! I steer the ship for a little while, before we get a spot of 3G from the English coast! Some send off a few messages to family and friends, and a few updates for the SttC comms team on land. After putting a few sails up, I retire to the galley to help our cook Marieke to make some bread dough. We leave it kneading in the machine. We then prepare the breakfast things also as a part of our early shift. The sun comes up, and with it some of the other participants start getting up too. It’s 7:00am and I head up back to the wheel with some tea for the others. People start tucking into the porridge and caramelised apples. We also eat some around some sailing tasks. It’s now 9:00am and we log the last entry on the logbook before handing the wheel to the next shift. The sun comes out and everyone is re-energised. We have a very nice day journaling, playing music, dancing, making lunch, reading books, doing acroyoga and everything that people dreamed of doing. Rather than puking all the time. Some people are still feeling under the weather, but it’s nice to see others helping them. Feeling of community and solidarity is slowly growing… 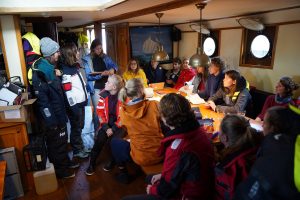 Thinking and doing
The ship and the people are ready to get to work. It is time to start the think tank. During a general assembly we get announce the Working Group topics. People divide themselves up to these groups, according to their sailing shifts and interests. The first task until Casablanca for these groups is to identify three of the most pressing questions to pass on to the Vision Groups established for the next leg. Other tasks include a stakeholder analysis and process map. Keep an eye on the Sail to the COP Facebook and website for a video series on the think tank! The think tank now landed in Brest in France, because the Regina Maris needs a new part for the desalination system. We’re here working on social media reach, and stocking up on supplies. To staying with you land people long, but happy to share something mid-journey! Hasta luego until Casablanca!

The challenge Climate change is increasingly affecting social and...

Dutch version The challenge Cities and municipalities are confronted...

Sail to the COP on board the Regina Maris...

The morning sun licks the horizon as Regina Maris,...

Sail to the COP Update “Attending a Climate Conference from two sides of the Atlantic Ocean”
‘Shop Klimaatwijs’ – Practical approach for schools to work on E...

Dutch version The challenge Shop owners are often not...

Data that will boost the transformation of cities
Sail to the COP Blog #5: From crisis to positive vibes

After long deliberations about what to do now the...

The first ever Atlantic Ocean Climathon is now finished!...

A community of 3,000 people in Madagascar overcome climate...

EIT Climate-KIC supports the Sail to the COP initiative....

The Dutch start-up Field Factors – who is one...

Blog date: 27 September Preparing for the Voyage I...

Sail to the COP will deliver a road map to a sustainable future of travel
Carbon LED, LED lights for sustainable greenhouses

The challenge Cities are accountable for 70% of the...

The challenge Nature Based Solutions are innovations that are...

Nature Based Solutions, Creating climate-resilient cities with the help of nature
Black bear carbon, The green solution for old tires

The challenge Meat consumption has a devastating impact on...

The challenge The road from a great idea to...

The challenge Farmers with elevated plots of land have...